All indoor games are played at the Canada Games Center Fieldhouse. Teams are six-a-side, including the goalie.

Several rule variations have been developed to accommodate the peculiarities of the field and the league philosophy. 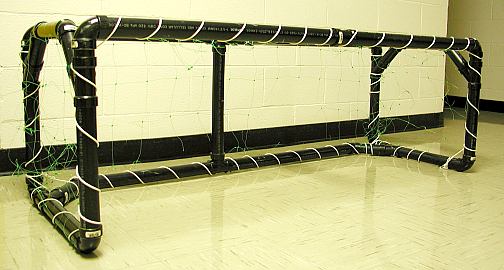 We use custom-built nets that are lower than knee height. This helps to discourage dangerous high shots, but also makes it more challenging to score.

It does mean that we need a few modifications to the rules:

The side walls are considered in bounds, so use this to your advantage! However if the ball goes over the side walls, into either the netting or the substitute bench, then it is out of bounds. The other team gets a free kick from where the ball went out.

If the ball goes out over the back wall, then:

Sound confusing? Ask one of your teammates to explain, it makes much more sense on the field!

If you score a goal: well done! Now go and swap out the goalie...

There are no referees so call your own handballs, fouls, and out of bounds. Remember that this is a non-competitive league, so if you disagree with another player's call: keep it to yourself and get on with the game!

Make substitutions on-the-fly, there is no need to wait for a stoppage. When you want to go off, just attract the attention of the person coming on and make the substition. Don’t forget to also swap out the goalie!