Whitehorse Recreational Co-ed Soccer is a non-competitive recreational league for adults (18 and over) that has been running since 1999. Whether you join for outdoor or indoor, you'll meet many people, get lots of exercise, and have loads of fun. We typically put on one social event each season as well. Plus, you get a glamorous T-shirt for your registration fee. Our outdoor season starts in May, the indoor season in October. 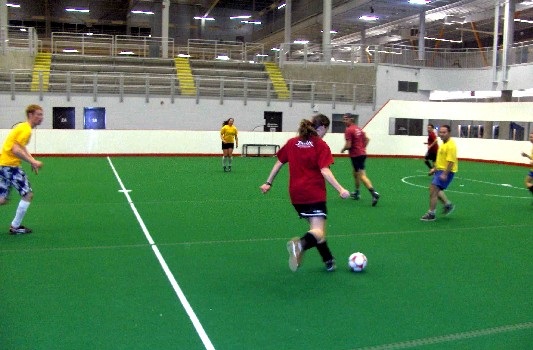 Registration for the 2021/22 indoor season has closed. Please note special accomodation being made to follow YG covid19 protocols. The season starts on Sunday, October 17th.

More information on our indoor season can be found here.

Registration for outdoor summer play is now open and closes on Friday May 21 at 12:00 Noon. First day of the season is May 24. Games are played on Monday and Thursdays at 7:30 PM.

Please note an important covid rule accommodation before you complete your registration.

Go to our Downloads Page to get the schedule and team lists or read more about our outdoor games here. 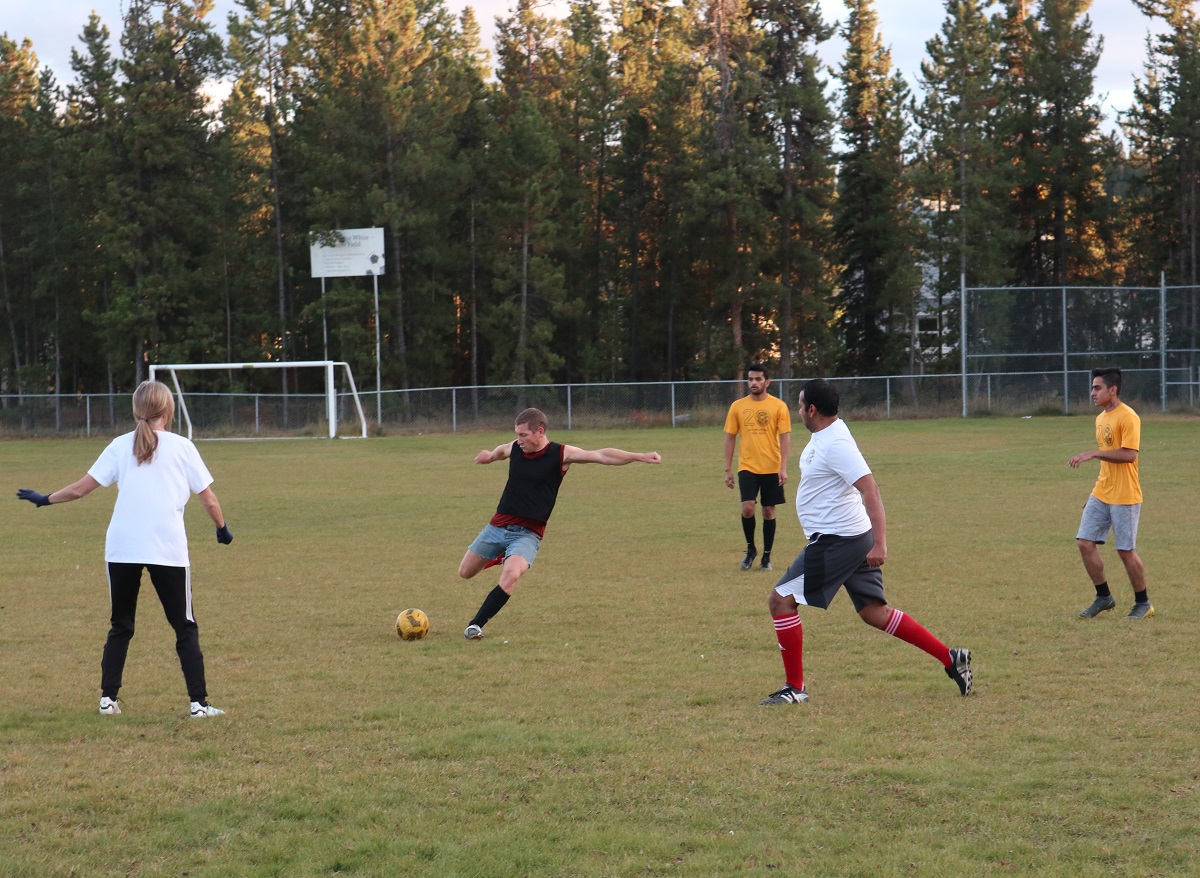 The Whitehorse Star featured the league in an article! Travis and Ehab from the Blue team were quoted for the story and an awesome action shot from the game between Black and Blue was included. The article was published on January 10th.

...the emphasis is on learning the game, building a skill set and making new friends.

It’s about having fun so I enjoy encouraging both teams.

...a good mix of skilled players and new players...

I feel like I’ve come a long way and the better players make you better. 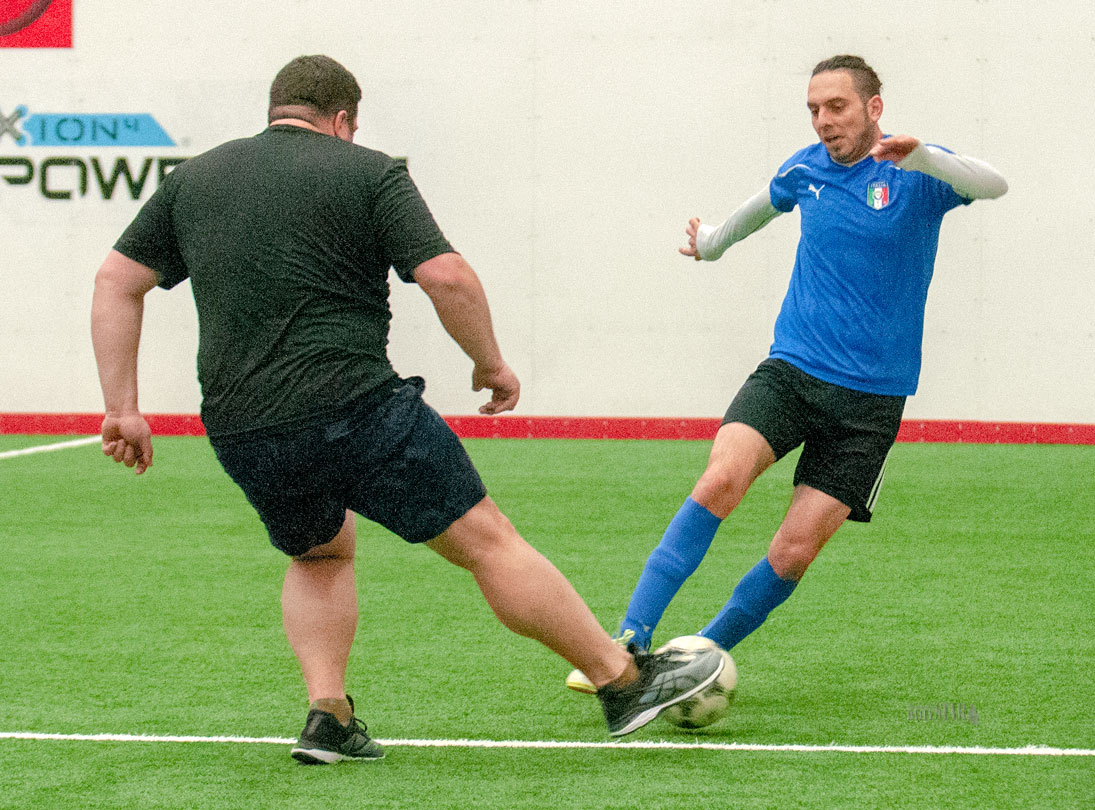 MAKING HIS MOVE – Ehab Alhag Hussen dribbles around his defender during a Whitehorse Recreational Co-ed Soccer game Wednesday at the Canada Games Centre to kick off the second half of the season.

Whitehorse Recreational Co-ed Soccer kicked-off the second half of their indoor season Wednesday at the Canada Games Centre.

Whitehorse Recreational Co-ed Soccer kicked-off the second half of their indoor season Wednesday at the Canada Games Centre. The league had 93 players register for the second half, including 14 new players who have never played in the league before.

One thing you will notice when watching one of the soccer games is that they do not keep score. Instead the emphasis is on learning the game, building a skill set and making new friends.

Travis McCallum moved to Whitehorse, from Toronto, in April. Although he does not have much experience playing soccer he says since first joining the outdoor league and now the indoor he sees his skills growing.

“I’ve never really played soccer before and I was never really a fan of it until I went to a TFC (Toronto Football Club) game,” said McCallum. “After that, I really took to the sport, so I jumped on the chance to play.

“Since then I’ve received really good mentorship from the really good players in the league and it helps develop you as a player too.”

McCallum says since joining the league he is gaining a newfound appreciation for the spot.

“I came from mostly playing hockey growing up and soccer was something I played when I was five so it doesn’t really count so I kind of put it aside,” said McCallum.

“Once you get on the field I didn’t realize how difficult it is, how taxing it is, I am exhausted.”

The teams, Black and Blue, aptly named after their jersey colour, were all over the field at CGC putting forth their best efforts. McCallum says the league has a good mix of skilled players and new players and that made his transition into the sport easier.

“For some people, it’s fun and exercise and for the better players it’s about staying on top of their game and a chance to provide some mentorship to the new people,” said McCallum. “For me, Ehab (Alhag Hussen) is always a good coach on the field and is willing to give you tips and in an encouraging way which is much appreciated. He has a lot of patience for the new players so it’s really good having him and the other team captains in the league because they are really willing to put the work in.”

After playing in the summer league and now the indoor winter league with some of the experienced players McCallum says he is starting to get a feel for how the game is supposed to be played.

“It makes it so much easier because I don’t know the strategy of the game yet,” said McCallum about playing with someone like Alhag Hussen. “My positioning can be way off so it’s nice to have that encouragement to cover the point cover the open man. He is always keeping you and you learn so much from that. When I look back on how bad I was in May now I can feel like I can contribute and compete. I feel like I’ve come a long way and the better players make you better.”

Alhag Hussen, McCallum’s teammate on the Blue team, could be seen flying all over the field, controlling the ball and setting up his teammates. His voice also echoed around the field offering encouragement not only to his own team but also the other side.

“When I came here I was asking about soccer and they said this is soccer for starters,” said Alhag Hussen. “This league has been made for fun and for me I really enjoy playing in this league.”

Not keeping score is just one step the league has taken to keeping the focus on fun. The nets used by the teams are also significantly smaller and there is no designated goalie who can use their hands.

“So as you can see there are small nets,” said Alhag Hussen. “The reason why they put the small nets is so people don’t slam the ball and the keeper without using their hands and only their feet it avoids high shots.”

The focus is on technique building, skill building and exercise, as well as Alhag Hussen puts it, “it is a lot of running,” something his teammate McCallum would agree with.

“On the smaller field it’s less players so you have to make up a lot of ground with your legs,” said McCallum. “There is a lot less passing, a lot more running.”

The teams play six-on-six including the goalie.